“Just thought I’d share about a rescue horse who had the worst case of White Line Disease (also known as Seedy Toe) that two vets had ever seen. They said it would not be a bad idea to have this horse euthanized, due to the severity of his front hooves. 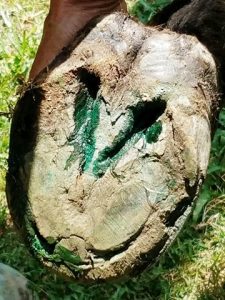 We brought Pilot home as a rescue, along with another neglected horse. The other horse has moon-blindness and cannot see much but shadows.

Pilot, on the other hand, had such bad hooves that he was giving on his front end. We immediately called our farrier who came to the rescue. We padded his hooves as best we could until his Cavallo Boots arrived.

He was in such pain on his right hoof that we couldn’t even lift his left front hoof off the ground. It put too much pressure on the right one, which was the worst. We had a big fight on our hands whenever we needed to change his padding, due to the pain this poor horse was in.

Armed with a Great Farrier, Optimism, and Cavallos! After his boots arrived, things got better and better when we had to change the padding. We still cut up apples to divert his attention whenever we deal with cleaning and changing his boots, but after six months, we see light at the end of the tunnel. He is now is 75% better. His whole right hoof sounded hollow when we first started dealing with him. Not anymore!

Our farrier is very pleased with his progress so far. We don’t think that there has been a farrier in Pilot’s life for some time, due to the neglect his hooves showed.

He wears his boots 24/7. They are cleaned and changed after rain since he is out with his friends in the pasture. His hooves are wrapped in a disposable diaper and put into his Cavallos, which he always wears. Progress is much better as time goes on. We are so happy with his progress!  Right now, Pilot is sound when wearing his boots. Heck, he is now sound without them, but until his farrier gives us the thumbs up to remove them, he will be protected by wearing them.

He wears Cavallo Trek and I highly recommend them!”