Here’s what YOU’RE saying! Happy horses all around…just the way we like it!

A Review to Reckon With – Horse Trail Chicks Tell it Like it is!

Greg was approached by the ‘Horse Trail Chicks’ at a show last year. They requested a pair of Trek so they could do a review – and they were very clear that they provided only unbiased and impartial views.  We’re excited to see that, after giving their Treks a serious workout over last Winter and Spring, their review is READY!!!  Here’s a snippet:

“This past winter I had the opportunity to try a pair of Cavallo Trek Hoof Boots.  Prior to this, I had pretty much written off hoof boots, having had a few experiences with boots flying off at the trot or gallop and causing bucking episodes and other unpleasantness. So when I saw the Cavallos at Equine Affaire, I was pretty excited – they looked like they would stay put on the hoof. They can also be fitted with studs, which means that my horse – who is always barefoot in the winter – can safely walk out on icy roads…”

An EXCITING Night for a Mini with Laminitis!

Valentine was hurting…bad!  Then her owner rustled up some CLB’s and the MAGIC happened:

“This has been an extremely exciting night for us!!!  It’s the first time Valentine has been able to go out on gravel since she foundered almost 2 years ago! So happy these came in the mail today. They fit perfectly and she may or may not be wearing her mother’s socks! 😉

She hasn’t wanted to go anywhere besides her paddock and stall – but tonight she went all over the property!”

These Boots are the BOMB! These boots are the BOMB!!!!  My 30 year old retired show horse was having trouble keeping shoes on, so my farrier and I decided to take them off and let him go barefoot.  Unfortunately he quickly became very sore and could barely walk out to the pasture.  My farrier suggested I try Cavallo Boots, as he had a client who used them with great success.  I immediately ordered a pair and they arrived two days later.  The boots were incredibly easy to slip on and fasten….but the real test….

The answer to 1. is YES!!! The answer to 2. is NO!!!  My old boy walked out without any soreness and, once in the pasture, he proceeded to trot, then gallop around like he was a ten again!  This, after barely being able to walk!   He’s worn his Cavallo’s 24/7 for the last two months and he has yet to lose them or get a rub (even with a few crazy runs with his pasture mates!).  I can’t say enough about these durable, well-constructed boots and would highly recommend them to anyone.  My farrier did quietly say the boots could put him out of business if everyone caught on to these…  Once again they are the BOMB!!!

Back Country Horsemen of BC – Kicking Butt in Cavallos!

“Thought you might be interested in this post. The paint mare I rode wore Cavallo Hoof Boots for three days of riding – a 60 km pack trip along the Collins Overland Telegraph Trail (west of Quesnel).

I’m honored to be part of the first packers to travel this entire cleared section in 50 years – paying tribute to Dwight Dodge, enjoying fascinating history, and appreciating all the hard work of Rob and BCHBC North Cariboo chapter.”

To read more about the Back Country Horsemen of BC’s quest to revitalize the historic Telegraph Trail, click HERE!

Nothing Comes Between this Mule and her Cavallos! “I love Cavallo boots!  I’ve been using the Trek Slim boots on my mule for about eight years and they work great!  Worth every penny.  I still have the first pair I bought – I use them on the backs and bought new pairs for the front. These Boots really last a long time, I just can’t say enough good things about them. They’ve never come, off no matter what I ride through, and I ride through some pretty thick mud and very rough terrain!

Okay – I took some pictures of Pearl wearing her Cavallos.  She’s a 16-3 hand Percheron Tennessee Walker Mammoth Jack stock mule. I love my Cavallo Boots I’ve had one pair for 8 years and another pair for about six and they’re still in great shape. I highly recommend these boots to people with mules as I’ve tried all types of boots before these and none worked efficiently – they all came off. The only boot that has stayed my mule is the Cavallo Trek Slim.”

The Happiest Haflinger – Competing in Cavallos

“Me and my Haflinger pony Wilma have been really happy with our Cavallo boots! Wilma was barefoot when I bought her and I wanted to give her a chance to stay that way, despite that I was planning to turn her into a competing sport pony. With Cavallo boots, Wilma’s hoofs are doing great even though we train 5-6 days a week on varying surfaces. We have also started our competing career with Cavallos!

Cavallo boots have been easy to fit, easy to put on and easy to keep clean. They stay on tight and are comfortable for the horse!

In Finland hoof boots are quite a new thing and people don’t know that it’s possible to compete in show jumping with boots. After buying Cavallo boots for Wilma, I got numerous questions on our Instagram account about going barefoot, using boots and training and competing with them. Barefoot Wilma can be found on Instagram at @dancingonfourlegs !” 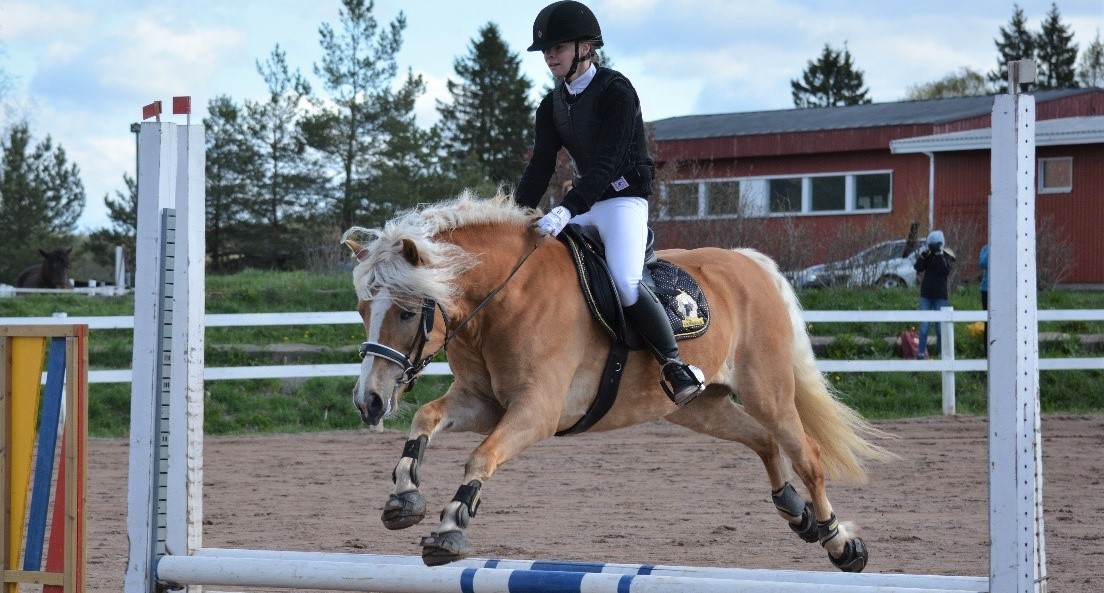 So keep the letters and emails coming, we just can’t get enough!

Wishing you and your horses many happy trails,